2014 has been a very difficult year for Caleb medically, which has been very challenging for our entire family.

On April 18th, Caleb had surgery to have a Vagal Nerve Stimulator implanted.Â  It was our hope, as well as the hope of Caleb’s long-time neurologist that this device would help his seizures and possibly his behavior and allow Caleb to be able to wean off of some of his seizure medication.Â  Normally the device is implanted one day and then activated a couple of weeks later; however, because we had been having such a difficult time with Caleb’s seizures, Caleb’s doctor wanted to have his turned on immediately.

We began noticing a difference in Caleb’s behavior almost instantly.Â  He was much less aggressive at home — school that was a whole other story.Â  We were not seeing the seizure symptoms as frequently.Â  We learned that we would need to go to the neurologist weekly for at least seven weeks, which we ended up going much longer than seven weeks, but we had to get to the optimal voltage for Caleb.

About three weeks later, the neck incision got infected.Â  We started on another round of antibiotics and it wouldn’t heal.Â  So we started on a second (or third round, however you want to count them), cultured the incision, got a call that we needed to add a second antibiotic and keep the incision clean.Â  Caleb’s surgeon happened to be out the entire month of June, so they tried to get us into another surgeon, but that was a waste, because he didn’t stitch the open wound closed.

In July, we were still battling the neck incision not healing and being on all of these antibiotics.Â  I took Caleb to his pediatrician a couple of days before the 4th of July.Â  She ran from labs and we learned that his neutrophils, which are the infection fighting cells were at ZERO.Â  She immediately said that he needed to be admitted to the hospital and put on IV antibiotics.Â  Caleb has a history of being neutropenic, but his neutrophils have never been at zero.Â  After being admitted and having numerous tests run and IV antibiotics started, only to have the medication have a bad side effect of starting to shut his kidneys down and they had to find a different antibiotic to give him by IV, and then his bone marrow still not start producing any neutrophils on their own, did they have to give him shots three days in a row to get his bone marrow to produce what it should have normally produced on its own.Â  But no one knows why it would not produce it on its own.

After spending eight days in the hospital, they deemed Caleb well enough to go home.Â  However, when we got home, Caleb still was not eating.Â  Then he started to be unable to keep anything down, even his medication.

The first two pictures are from the first hospitalization.Â  Poor kiddo was just so worn out he just slept so much, but having no infection fighting cells and having your body full of infection will do that to you!

The third picture is from the ER waiting room where we were waiting to try to get Caleb readmitted when he could not keep anything down. 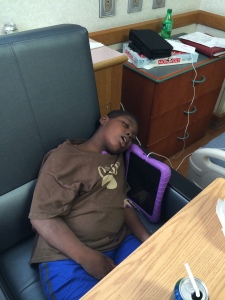 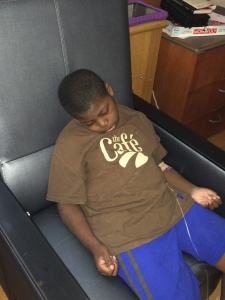 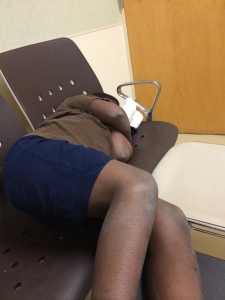 So less than two weeks later, we ended up back in-patient for another week.

Between these two hospitalizations Caleb’s neck incision healed and the VNS was continuing to work. School started mid-August and that was a fairly smooth transition, since it was a new school for Caleb this year — which will be another post for another day.

I’ll also need to finish this post another day — it’s getting quite lengthy!